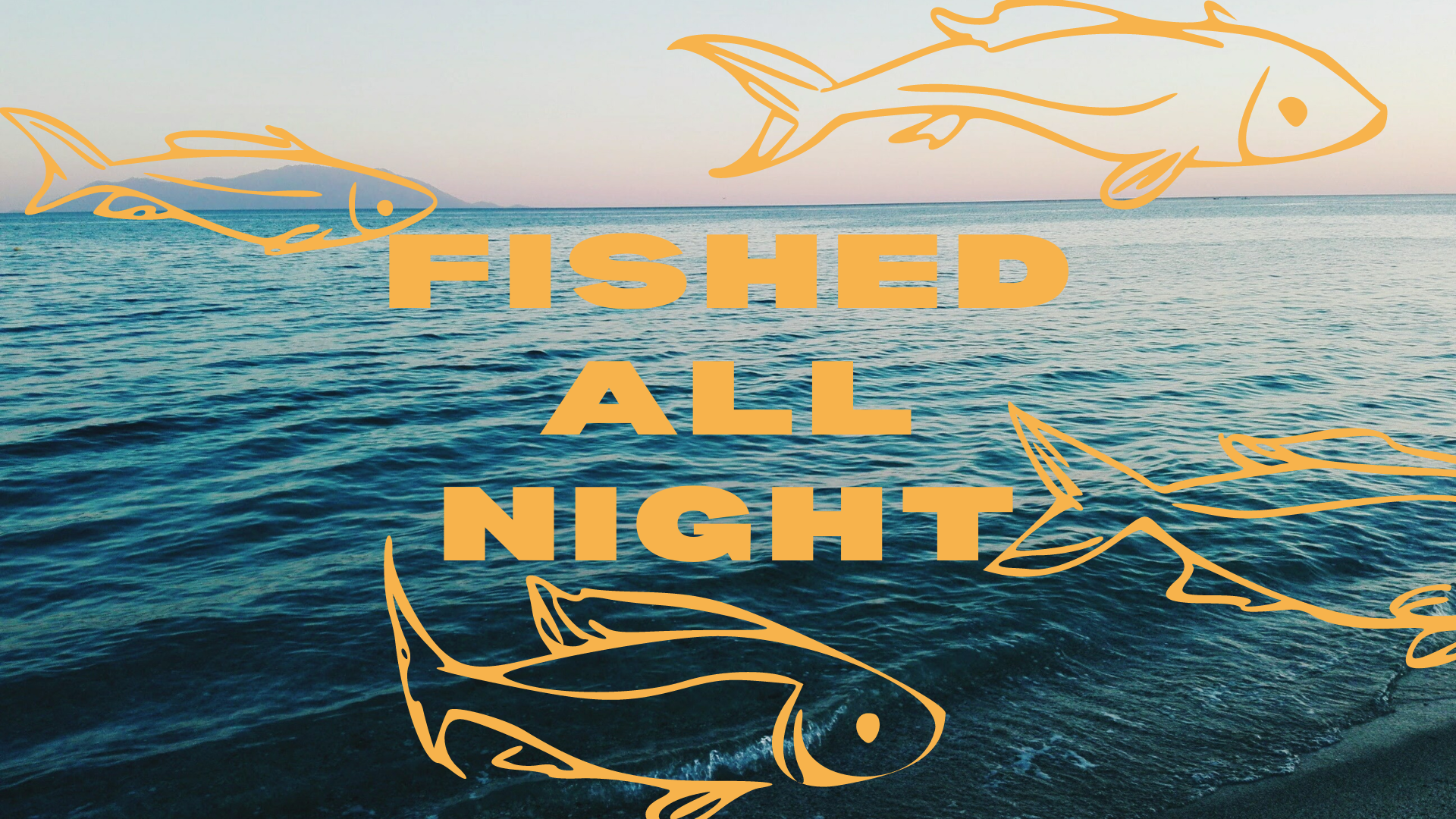 In Luke chapter 5, we read about Peter, who had fished all night and didn’t catch a thing. So, Jesus asks to borrow Peter’s boat as a pulpit so he can teach the crowd. Maybe Peter felt like giving up trying to fish for anything, however, he did what Jesus asked and to his astonishment, he was called to something bigger than himself.

‘On one occasion, Jesus was preaching to the crowds on the shore of Lake Galilee. There was a vast multitude of people pushing to get close to Jesus to hear the word of God. He noticed two fishing boats at the water’s edge, with the fishermen nearby, rinsing their nets. Jesus climbed into the boat belonging to Simon Peter and asked him, “Let me use your boat. Push it off a short distance away from the shore so I can speak to the crowds.” Jesus sat down and taught the people from the boat.

When he had finished, he said to Peter, “Now row out to deep water to cast your nets and you will have a great catch.” “Master,” Peter replied, “we’ve just come back from fishing all night and didn’t catch a thing. But if you insist, we’ll go out again and let down our nets because of your word.” When they pulled up their nets, they were shocked to see a huge catch of fish, so much that their nets were ready to burst! They waved to their business partners in the other boat for help. They ended up completely filling both boats with fish until their boats began to sink!

When Simon Peter saw this astonishing miracle, he knelt at Jesus’ feet and begged him, “Go away from me, Master, for I am a sinful man!” Simon Peter and the other fishermen – including his fishing partners, Jacob, and John, the sons of Zebedee – were awestruck over the miracle of fish. Jesus answered, “Do not yield to your fear, Simon Peter. From now on you will catch men for salvation!” After pulling their boats to the shore, they left everything behind and followed Jesus.’ Luke 5:1-11 (TPT)

There are some observations I’d like to point out in this story that can help you when you feel like you’ve fished all night and didn’t catch a thing, leaving you wondering if you’ve missed the boat to your calling.

Let Jesus Step Into Your Boat

Jesus climbs into Peter’s boat and asks if He could use his fishing boat as a pulpit to preach a message to the crowds. Peter was tired, he’d fished all night and caught nothing, he probably just wanted to go home and get some sleep. But then he possibly thought to himself, “What have I got to lose letting Jesus step into my boat?” Peter probably thought of his boat as a thing that was familiar to him, the vessel that was, well, so ordinary. He’d sat on it all night to catch fish and he hadn’t caught a thing. At least it would be useful for something, even if it was only to be used as a pulpit from now on so Jesus could teach the crowds.

What ordinary, familiar thing has Jesus asked to use in your life? Something He could step into that seems so normal to you and He could use it to share the message with others? Perhaps you’ve fished all night with your boat and caught nothing? Maybe it’s time to allow Jesus to step into your boat and see what happens next?

Row Out To The Deep Water

‘When he had finished, he said to Peter, “Now row out to deep water to cast your nets and you will have a great catch.” Notice when Jesus had finished teaching the crowds, He asked Peter to row out to the deeper water. Sometimes we need to get away from the crowds to go deeper with Jesus. Perhaps some of the other fishermen wondered what Peter was doing. Hadn’t he fished all night with the very same boat and caught nothing? Why waste effort in rowing out into the deep water? Deep water faith comes when we trust Jesus enough to keep rowing regardless of how ridiculous it looks to others. If you’ve fished all night and caught nothing, allow Jesus to guide you into deeper waters.

The Promise Of A Good Catch

When they pulled up their nets, they were shocked to see a huge catch of fish, so much that their nets were ready to burst! They waved to their business partners in the other boat for help…After pulling their boats to the shore, they left everything behind and followed Jesus.’

Hold up! They were astonished because their nets were breaking and their boats were sinking because of the good catch, and now, now they left everything behind and followed Jesus?! I think when we read this story from the perspective that the great catch of fish was a miracle. And yes, by all accounts it looks that way. I mean, to go from fishing all night and catching nothing, to fishing in the heat of the day and catching more fish than you’ve ever dreamed of is amazing!

And don’t forget, Jesus was the One who provided all those fish too! However, I believe what’s more amazing is the fact that Peter and the other fishermen still left everything behind so they could follow Jesus even though He’d given them what they thought they wanted, what they thought they needed. Fish, and lots of it. They could live on it for the rest of the fishing season for sure!

However, the real miracle was that they left the temporal, good catch for the better catch. The catch of men for salvation. I think the catch of fish was a testing ground before Jesus asked them to become His disciples. I think Jesus was testing the fishermen to see if they would leave the temporal catch and follow Him on the adventure into the unknown.

In the story, I think the keywords we can sometimes miss are these, “Do not yield to your fear, Simon Peter.”

If Peter had refused Jesus’ offer to follow Him out of fear because he believed he wouldn’t have enough if he left the fish behind and followed Jesus, do you think we would be reading about all the other amazing stories involving Peter in the New Testament? Peter heard the call loud and clear and he couldn’t escape the responsibility of hearing Jesus’ words, “From now on you will catch men for salvation!”

“…the call has come to me so plainly that I cannot escape…I have been unable to shake off my responsibility” writes Charles M. Sheldon in his book, In His Steps. Oh, so true! Like Peter, when we hear so plainly Jesus calling us to follow Him no matter where it leads and regardless of how many fish we have hauled up onto our little boats, then we cannot escape it, we cannot pretend He didn’t say our name. We have to respond!

When we’re asked by Jesus to follow Him that can mean leaving behind the fear of wondering if God will provide for all our needs as we leave our familiar, our ordinary, our ‘we’ve fished all night’ moments. Know this; Jesus is your Jehovah-Jireh; your provider and you don’t need to fear.

Perhaps you’ve fished all night and didn’t catch a thing? Maybe it’s the fear of leaving the fish behind, of not having enough that stops your faith from following Jesus’ call?

Why not test the waters first in following Jesus, and just allow Him to step into your boat.

Do you feel like giving up on something because you’ve fished all night and didn’t catch a thing? Are you afraid to leave things behind so you can follow Jesus because you feel He won’t provide for you?

I pray today, for you to have the courage and boldness to follow Jesus wherever he is leading you so you can experience the adventure of a lifetime. I pray for fear to have no more hold over you so you can fully embrace the calling He has for your life. In Jesus’ name, amen.