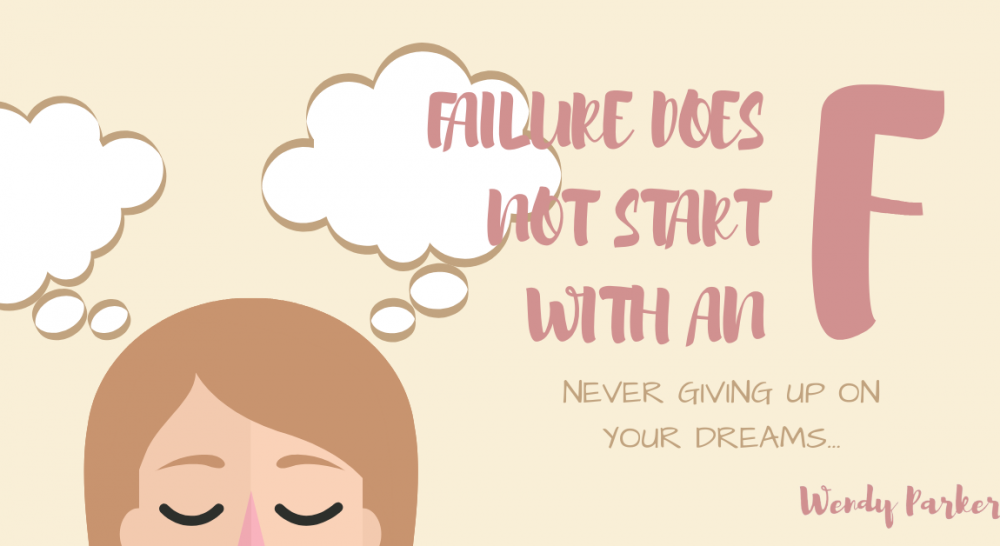 Failure Does Not Start With F

Never giving up on your dreams

Are you barely convinced that God’s got you? Me too. It’s okay, you can be honest here it’s a safe place. Whenever God nudges me to step out, my mind instantly goes back to when I stepped out in the past and failed. But if there’s one thing I learnt about God is this; He will never let you give up on your dreams because of failure. In God’s kingdom failure does not start with F.

I’ll be honest, I was so afraid to step out again into my dreams because of my past failures that I froze. So, since we’re friends, I’m going to let you in on a little secret. I felt the full force of that F in failure just last week. I took the bold step of quitting my day job so I could focus on you guys more and live my dream of becoming a full-time writer. The funny thing was this; I’d done all the good Christian stuff like pray, read the Word, seek wisdom from family and friends. God was pulling out all the stops trying to persuade me to start moving into my calling and I truly saw miracles every step of my journey.

But here’s the kicker, I “talked the talk”, sure, that’s what every good Christian guy and gal does, right? However, I was still scared to death of failing again. I was afraid that God hadn’t directed my path and I was going to end up with that big F printed on my forehead yet again that took years for me to rub off. My mind went from, “Great decision, Wendy/bad decision, Wendy,” every half an hour.

I watched a sermon by Carl Lentz, the pastor of Hillsong, New York City. He said that we are to be bridges even through this hard season of the COVID-19 pandemic. The statement that arrested my heart was this, “It is still not about me.” BOOM!

If we keep putting an F in front of our failures. If we let those cesspool of F’s drown us in a sea of hopelessness,  then we are never going to get those big dreams off the ground, my friend. Our dreams, our talents and our gifting are not about us.

Look at Moses. One of the most, no wait, THE MOST  seasoned Bible heroes. I’m gonna let you into a little secret about Moses…

…When God called to him from the burning bush in the dessert he was barely convinced that God had chosen the right man for the big job ahead. All Moses saw was the big F on his forehead because he’d stepped out before in Exodus 2:11-12, thinking God was directing him. But it was a complete failure. Moses had killed an Egyptian in secret, believing this was how he was going to save all the Hebrews from slavery. However, Pharaoh found out that Moses had murdered and hid the body of the Egyptian, and up until then, he had been running from that dream to free the Israelites for forty long years. Even though God had given Moses an epic ‘burning bush’  moment in the dessert of failings, Moses still saw the big F for failure on his own forehead and gave God a ton of excuses.

FAITH to never give up on your dreams, even though you’ve failed numerous times. FAITH to get back up and dust those dreams off and start again. FAITH to build your strength for the journey toward your big dream.

God gave you a dream that’s as hot as the burning bush in Exodus chapter 3, and He is telling you, just like He told Moses in Exodus 3:12, “Do not fear. I will be with you every step of the way.”

Failure does not start with F because your dream is still not about you. So, strap up those sandals, leave the dessert of failures and start walking back towards that dream!