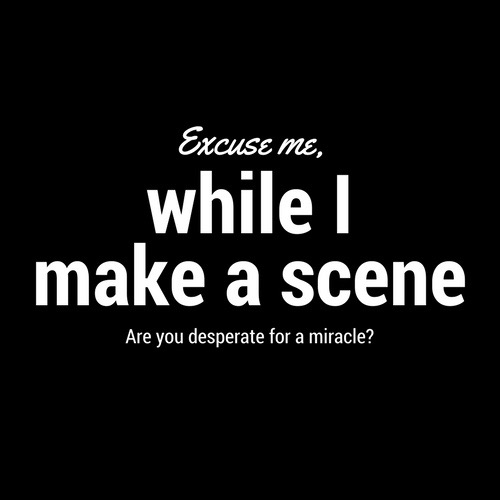 Excuse me, while I make a scene – Are you desperate for a miracle?

I’m sure if you’re the proud parent

Once or twice before

But what if making a scene for all the right reasons

Have you ever gotten to the point

Where you’re so desperate for a miracle

You don’t care what people think

When you’re praying on your hands and knees

Crying out to God

When my son developed his second foot ulcer, last year

Made me well and truly look for a miracle

Needing a miracle for her son

Of course, I had to make a scene

For all the right reasons

To get God’s attention

And hopefully – a miracle

Excuse me, while I make a scene

I can relate with the beggar called, Blind Bartimaeus, in Mark chapter 10

He was so desperate for his miracle

That he yelled over the crowd

Trying to shut him up

But Blind Bart yelled all the more

He was desperate for a miracle

“Jesus, Son of David, have mercy on me!” So Jesus stood still and commanded him to be called. Then they called the blind man, saying to him, “Be of good cheer. Rise. He is calling you.” Mark 10:48-49

What if Bartimaeus had listened to the crowd

Sometimes, you’ve got to push though

You’ve got to shout louder

And make a scene

To get your miracle

Quieten the nay-sayers who tell you

You have no place here

But that’s the beautiful thing about Jesus

He tells you that there is a place

Isn’t it amazing that

The crowd didn’t stop Jesus from passing by

It was the cry of one broken man

Who was desperate for an encounter

That stopped the Son of God in His tracks

And because he pushed through

To get his miracle

The crowd were suddenly with him

Telling him to rise

‘…And throwing aside his garment, he rose and came to Jesus’ Mark 10:50

Isn’t it time you

Threw aside your garment and came to Jesus?

The garment of religious activity

Or the garment of pomp and ceremony?

The garment of doing all the right things

That’s weighing you down

Because that’s what the crowd expect?

But he had enough faith

And to desperately cry out

Because he needed to experience

An encounter with God, that would change his destiny

He had to be bold enough

To tell the crowd

“Excuse me, while I make a scene. I need my miracle and I don’t care what you think.”

This response gets God’s attention

He is calling you

He hears your desperate cries

Because my son was healed from his foot ulcer!

Don’t let the crowd drown you out

As you cry out to Jesus

Push through and say

“Excuse me, while I make a scene”

After ‘making a scene’ have you experienced your own miracle?