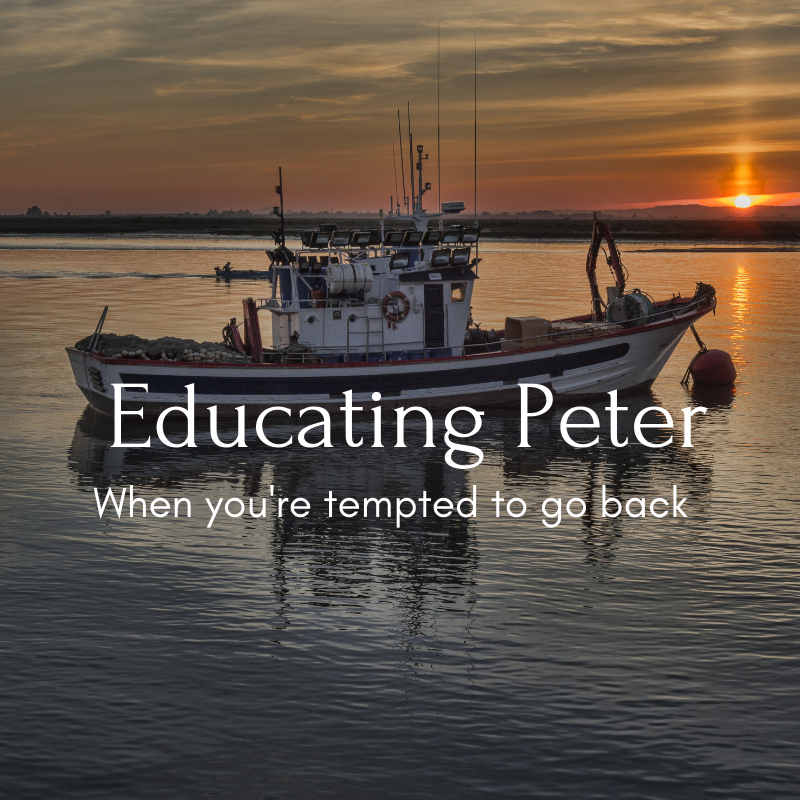 Educating Peter: When you’re tempted to go back.

Ever tried something new and got so far in that you find yourself tempted to go back? But go back to what? A mundane, boring existence? I don’t think so. It’s time to get educated!

One of my favourite movies is Educating Rita. It’s about Rita, a married hairdresser, who enrolls in night school to get an education. Her teacher, Dr. Bryant realizes that Rita has the potential to do well in her studies. But when Rita’s husband finds out she wants an education more than having babies, he leaves Rita wondering where she fits in. She wants to move forward but feels torn between her old life and the new one she wants to step into. Rita knew if she was to embrace her future, something had to change.

When Jesus asks you to “follow Me” something has to change. If we are to step into everything God has for us, we need to stop getting tempted to go back to how things were and step into the promises that are waiting for us.

WHEN YOU’RE TEMPTED TO GO BACK.

Look at Peter. He was a fisherman who took Jesus up on his offer to “follow Me.” He spent 3 years being educated by Jesus in ministry. But after Jesus’s death, Peter went back to fishing.

Why did Peter do that? Why after everything Jesus had taught him and after all the miracles he saw, why did Peter go back to catching fish when Jesus had educated Peter in something far better?

Because it was familiar territory to him. That’s what happens when you’re in limbo. You know you’ve outgrown where you’ve come from, but you feel unsure as to where God is leading you. So you run back to what’s familiar. Torn between the life you used to know and the life God has called you to. You run in fear until you’ve reached your comfort zone again where it’s safe and secure.

Jesus needed to educate Peter again and remind him that he had change too much to go back to fishing. It was time for Peter to step into his calling.

After something has been stretched it’s very difficult for it to go back to its original size. It can’t go back to how it was, it has to embrace the change.

If God is stretching you, let Him. He’s touching something in your life that needs to change. Don’t be tempted to go back, it’s a trap of the enemy to stunt your potential and growth, stopping God from educating you about who you truly are.

Besides, who wants a boring, mundane existence anyway?