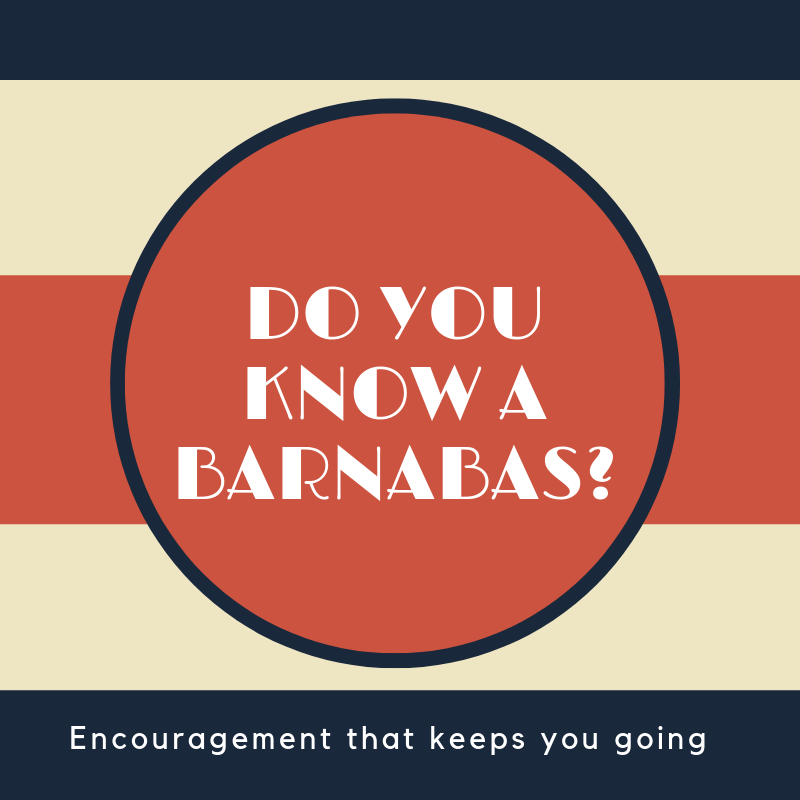 Do you know a Barnabas? Encouragement that keeps you going.

Ever had one of those days when you just can’t seem to get anything right? Yeah, me too. But, isn’t it good when a Barnabas comes along and tells you, “you’ve got this,” or, “keep going champ, you’re doing OK.” It’s their encouragement that keeps you going.

HOW TO BECOME A BARNABAS

You don’t have to have a ton of inspirational quotes written on the palm of your hand, or ten scriptures you know from memory ready to go every time you meet someone. Those are good, but I find that plain and simple can work just as well.

You can become a Barnabas without having to recite three TED Talks off the top of your head. Just say things like, “Hey, I really like the colour of your jacket, it really suits you,” can really brighten someones morning. Before you know it that person smiles and says, “Thanks. I really needed that.”

You just never know what’s going on inside people’s heads and a little word of encouragement goes a long, long way.

The best thing about encouragement is that it can make someone feel like a million bucks and it hasn’t cost you a thing.

In the book of Acts we read about a man named Joseph, a Levite from Cyprus (Acts 4:36) Nobody called him by his real name. The apostles just called him, Barnabas, which means, Son of Encouragement.

ENCOURAGEMENT THAT KEEPS YOU GOING.

When it came to encouraging people, Barnabas knocked it out of the ballpark! In fact, he helped start the first church. I can imagine everyone feeling nervous and not really understanding how it was all going to pan out, but Barnabas gave them words of encouragement and told them that they could make it, that the sky was the limit. To dream dreams like they’d never done before because God was cheering them on!

Maybe the people who started the first Church had other words spoken over them. Discouraging words that stifled and squished their enthusiasm.

Words that had pushed them into a mould that said, “You’ll never amount to nothing. This is where you belong, so get your head out of the clouds. Stop talking about your stupid dream and start looking at your limitations.

So you submit and settle down to more a realistic dream. A dream that seems more achievable and safe. You’ve lived under those discouraging words for years, until one day a Barnabas comes along.

Encouraging words can activate even the deadest of dead dreams. If you have a Barnabas in your life, look after him because they are your cheerleader when you need support and encouragement.

Will the dream that has been placed in your heart by God be easy? Nope. Worth it? Absolutely.

That’s why you need to know a Barnabas!