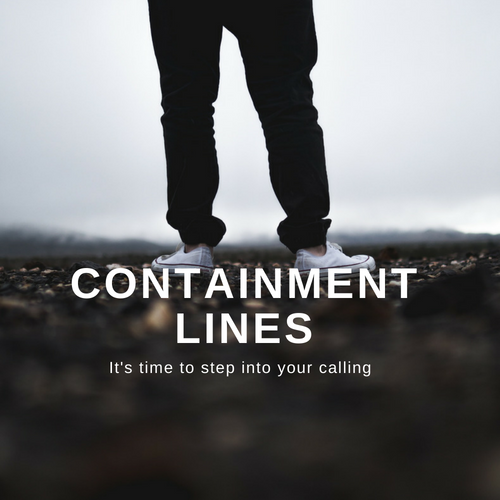 Containment Lines – It’s time to step into your calling

The bushfire season will soon be upon us in Australia, so when a fire starts the job of the fireman is to contain and control the blaze with containment lines. Eventually the fire will run out of fuel or finally be snuffed out by a change in weather conditions. That’s when containment lines are good.

But what if you feel restricted and confined by the containment lines in your life? What if containment lines are stopping you from having the confidence to step out into your calling? What if the enemy has made sure that the fire inside of you, runs out of fuel?

Satan doesn’t want you to advance forward and step into your calling. He will try everything to put a restricting spirit on you, so that any desire to move forward and break those containment lines will seem way too hard.

His goal is to prevent you from rising to a higher level, binding your soul to a ball and chain which limits your potential and renders you powerless to push past those containment lines and gain the confidence to step into your calling.

In Numbers 13, Moses was told by God to send out twelve men to spy on the land of Canaan.

And so off they went.

But ten came back saying, “We went to the land where you sent us. It truly flows with milk and honey, and this is its fruit. Nevertheless, the people who dwell in the land are strong; the cities are fortified and very large.”

Did you hear them?

The people are strong, the cities are fortified and very large.

Sounds like some restricting containment lines around their minds are being put in place.  They became afraid to take the land

But, God had already promised them the land, they just needed to fight for it.

IT’S TIME TO STEP INTO YOUR CALLING

Two men, named Joshua and Caleb were having none of that silly nonsense and tried to push past the containment lines that the enemy was trying to draw.

Caleb said, “Let’s go up at once and take possession, for we are well able to overcome it.” Numbers 13:30

Joshua backed his friend up and said, “If the Lord delights in us, then He will bring us into this land and give it to us.” Numbers 14:8

You’d think the people would be saying, “You are absolutely right. Let’s take the promised land.”

Can you believe that all the people wanted to stone Joshua and Caleb?

They knew God had promised them that land, but the people drew containment lines around them!

When you recognise the containment lines people will be trying to place on you, they throw stones at you. Telling you that you face strong, fortified and very large problems, so don’t cross that line!

You need to break through those containment lines and move forward. It’s time to step into your calling, my friend. Remember,  God has already given you the land. You just need to fight for it!