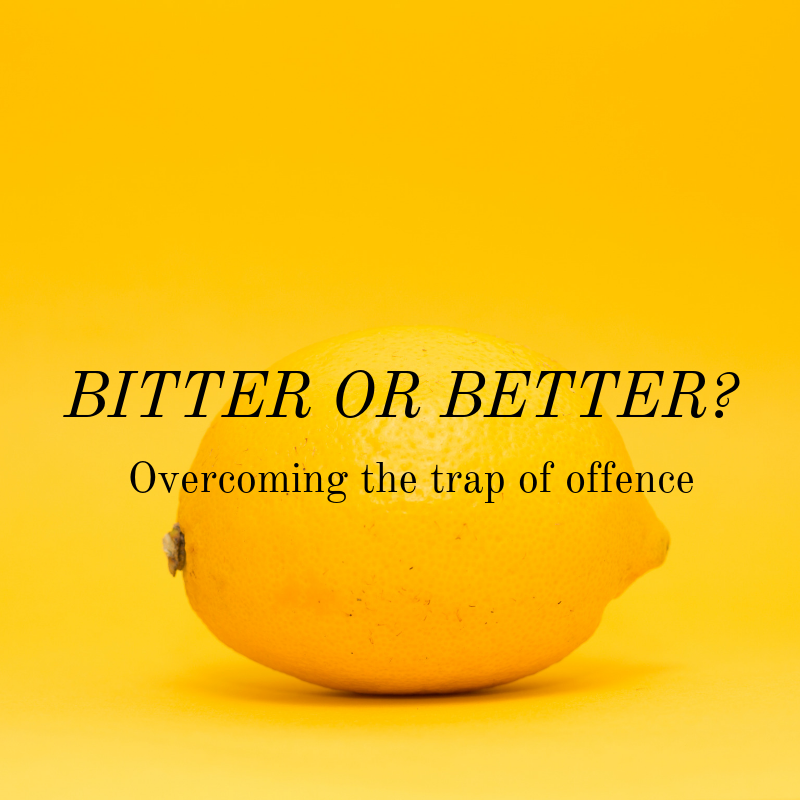 Bitter or Better? Overcoming the trap of offence​.

Here’s a crazy thought. If you had been waiting and waiting a really, really long time for something and it still hadn’t happened, would it make you bitter or better?

Would you fall into the trap of taking offence? Or have you learned through your experiences that some decisions will make or break your destiny?

Now, before you answer, I need to tell you one thing.

Your enemy couldn’t give a rip about how many promises that have been spoken over your life by God. He’s not fazed by how many prophecies sister Mary gave you in the last prayer meeting you attended. Why? Because all he needs to do to stop the calling on your life is to fire a single dart called offence. Once that poison- tipped arrow takes hold — well, it’s game over.

Joseph has to be one of my favourite stories in the Bible. It’s not the fact that his dream finally happened, it’s that he didn’t take offence. Even when he had every right to feel justified by bitterness.

The thing is, you just never know the day, hour or month when your dream is going to come to pass. You could be like Joseph, just going about your day just like any other and then WHAM! Pharaoh calls for you.

Maybe it’s today, or tomorrow or next Tuesday at precisely 3.03pm when your dream finally happens. But you need to be ready, you need to know that you’ve become better through your experiences rather than bitter.

The biggest test to take offence always seems to come right before your breakthrough. In Genesis 40:14 we find Joesph taking care of Pharaoh’s chief butler and baker in the dungeon. After interpreting the butler’s dream, Joseph asks him to remember him and make mention of him to Pharaoh and get him out of this prison. The butler is released from prison and…

He forgets all about Joseph. *Bangs head on Bible*

Can you believe that another 2 years passed before the butler remembers Joseph!

Plenty of time for Joseph to plot and scheme his revenge on that butler. Bitterness, if he’d let it could have taken root in his heart. So much so that when Pharaoh summoned him from the prison Joseph could have spat a string of bitter remarks toward the treatment he’d received and told Pharaoh to figure out his own stupid dream. He’d had it with everyone, especially God. Oh yes, especially Him.

When people let the trails toward their dream make them bitter instead of better, Satan claps his hands and ticks you off the list in his unfulfilled dreams and promises book. He writes in red pen your name against the column of offences towards God. Because it was totally God’s fault your dream didn’t come to pass. Tot-ally.

Too often, I’ve seen Christians be taken out because they’ve fallen into the trap of offence. Bitterness comes out of their mouths like a stream of poison-tipped darts flying in all directions. Ask them how they’re going with the dream God gave them and they will tell you that it could never happen until THAT PERSON who offended them 20 years ago apologises!

If we look back over our lives, I believe we’ve all encountered butlers. People who have promised to do something to help you, to get you out of the prison you were so wrongly put into so you can fulfil the destiny over your life.

But will you let all those butlers make you bitter or better?

The butler was a test. After Joseph’s dream came true, he had to face the biggest test of all. He had to face his brothers. The very ones who got him in this mess in the first place.

Joseph took no offence toward the butler who’d forgotten him, even when Joseph had no power or authority to do anything about it. Now, Pharaoh had given Joseph all power and authority, and yet he still forgave his brothers. That’s the mark of a true dreamer. That’s the mark of someone who’s become better rather than bitter.