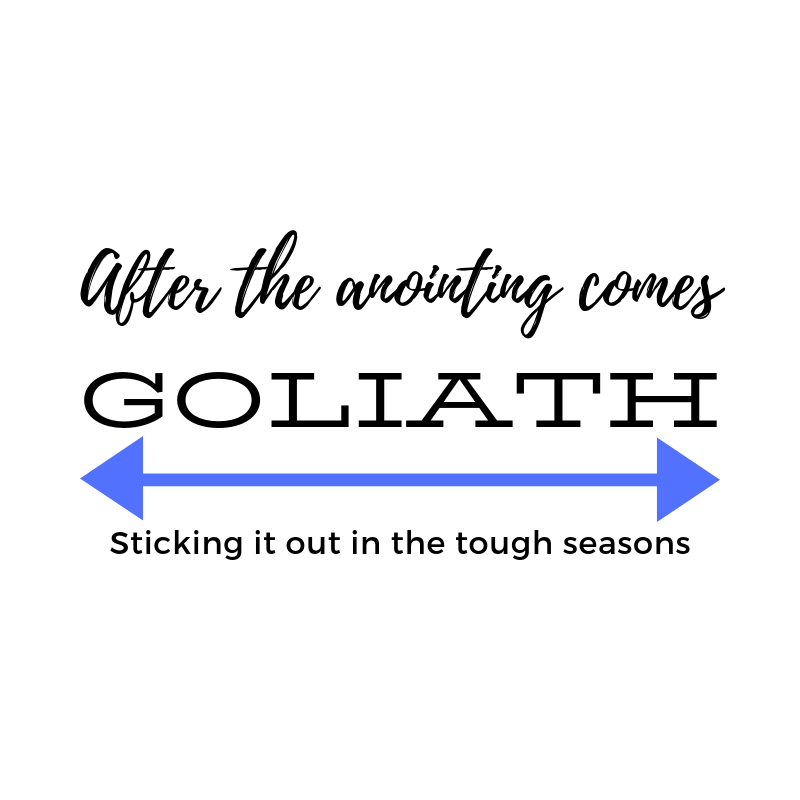 After The Anointing Comes Goliath

So you’ve had a word spoken over you, and it stirred your spirit. You have been anointed to step into whatever God has for you. Excited to see all that God has for your future, you can’t believe that He’s chosen you for this amazing task. But wait. Who is that walking over the horizon towards you carrying a javelin and a sword? It’s Goliath and he looks really mad…

AFTER THE ANOINTING COMES GOLIATH.

Unfortunately not every word you receive comes to pass straight away. There is a valley of testing that we all need to cross before our character can cope with the weightiness of the calling. Sticking it out in the tough seasons is all part of the process.

STICKING IT OUT IN THE TOUGH SEASONS.

Surely that can’t be, right? I get anointed and I’m ready, correct? Er no. Look at David, a Shepard boy who was anointed by the prophet Samuel to become the next king of Israel. After his anointing came Goliath, which David defeated. However, it was a lot of dark valleys that David had to go through before the promise that he would be Israel’s next king finally came to pass.

What about Jesus? John the Baptist baptized him and a dove ascended from heaven and landed on his shoulder. Now he was anointed for his public ministry. Did Jesus walk out of the water and start to preach to the crowds and perform miracles? No, he didn’t, because after the anointing came Goliath in the shape of the devil, tempting Jesus forty days and forty nights in the wilderness. That’s right, Jesus was in the wilderness after his anointing!

Look at Paul. He had an encounter with Jesus on the road to Damascus. Right there he was anointed to bring the Jews and non-Jews together as one community.(Acts 9:15) Over the course of Paul’s life, he suffered many Goliaths. Setbacks and persecution was part of his everyday living, all for trying to bring people from different worldviews together.

I think some Christians get all start-eyed when it comes to being anointed for a calling. They think how wonderful it must be, and yes, I believe it is. To walk in what God put you on this earth for is a true gift indeed. But nobody likes to talk about the Goliath’s they faced while pressing in and pushing back the negative comments from other people. Not many like to tell you that a Goliath after Goliath will come your way, each one bringing the potential to knock you out go the game, making sure you think twice about venturing into your anointing again.

If you have stepped out into your anointing only to find that you are fighting a Goliath, don’t panic, it’s confirmation that you’re going in the right direction! God will help you through the tough seasons. And believe me, they will come. But that is why God has chosen you, my friend. He knows you’re made of tougher stuff.

You have been anointed, make no mistake, and now it’s time to show your Goliath what you are truly made of!