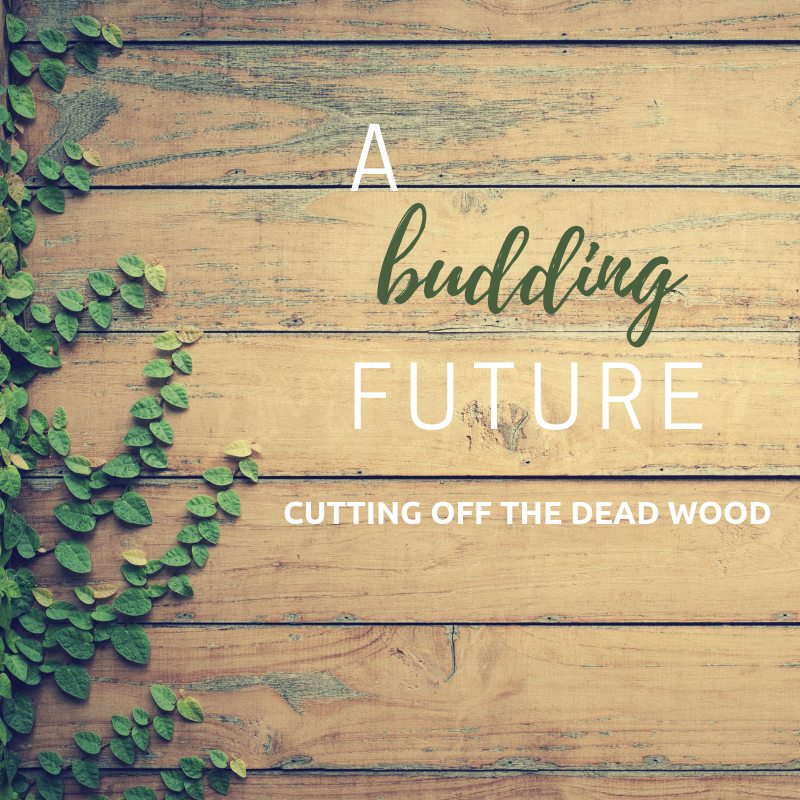 A Budding Future – Cutting off the dead wood.

Okay, I get it. You had a budding future that looked like a promising start. Your little seedling had germinated and was growing and blossoming into the potential of a fine tree. A tree ready to produce fruit. But all you see now is dead wood that used to be healthy branches. So, what went wrong?

I attended a women’s conference in Sydney last week, and one of the speakers said, “It’s the fruit the enemy wants.” I was quite taken aback, as it book-ended my questions of what I wanted out of this conference. I had prayed before going to the conference for God to cut off any dead wood that was hanging on my branches. I wanted to produce fruit. Fruit that would last. Now, in that moment I realised that no matter how hard I had tried, the enemy always seemed to have robbed me of my fruit. And, sorry to say, I had let him.

The spores of my anxiety and fears had produced fungi instead of fruit. I had allowed the enemy to keep me in the shade of the garden, thus stopping my potential from growing anymore. I had second-guessed God and now I was carrying dead wood.

Algae had grown on the dead wood of my branches causing me to remain unfruitful. I was in the wrong place in the garden and it was sapping my energy to produce fruit. I needed God to reposition me back into His light and Truth where I would bear much fruit.

CUTTING OFF THE DEAD WOOD.

I don’t know about you, but I am sick and tired of Satan stealing what isn’t his. John 15:16 reminds us, “You didn’t choose me, remember;I chose you, and put you in the world to bear fruit, fruit that won’t spoil.”

God chose us and He wants us to bear fruit. Not just fruit, but fruit that doesn’t spoil.

Yes, it’s gonna hurt being dug up and transplanted. But, it’s no good wallowing in self pity, hiding in the shade of the garden. Satan will shovel that manure onto you until your buried in it up to your neck. He’ll kept reminding you of how God has forgotten about you and left you to rot.

It’s time to move! Satan has kept you in the shade for far too long, my friend. It’s time to be replanted and repositioned in the garden so you can bear fruit. Healthy branches bear much fruit.

So, let God cut off that dead wood that’s been weighing you down, so you can grow into your budding future!